Okay, so triplets was a surprise. But I had a hunch it was twins!

I’ve spoken to so many multiple birth mamas out there who had a whole range of pregnancy symptoms early on, but the following ones have been pretty damn consistent across the board. Many are also experienced in single pregnancies, but it seems that the magnitude it greater and they are felt a lot sooner when you’re infested with, I mean pregnant with more than one tiny human. It might be too soon to get an ultrasound just yet, but if you’re gut is telling you there might be more going on that usual (and let’s face it, if you’re reading this article, you must think there’s something going on), read on to hear what a whole bunch of triplet mums have reported in the early days of their pregnancies.

Fatigue in multiple pregnancy can feel like you’re soul is leeching out of your body.

There’s no mistaking this symptom. While every woman is different and the signs of more than one baby on board can vary, every mum of higher order multiples I’ve spoken to has described this overwhelming exhaustion that consumes them. It might start as an afternoon crash – the kind that makes you wonder if you’re coming down with something or overdoing it and need to turn in early for a few nights. The tiredness progresses to an all consuming heaviness that will have you wondering what the heck is going on when you pour your fourth cup of coffee before midday. You’re growing a tribe, sister – no wonder you’re exhausted!

Need to pee all the time?

The need to urinate frequently in the later stages of pregnancy because your babies are putting pressure on your bladder makes complete sense, but many women find they need to pee more regularly in the first few weeks too. This is because of the changes in hormones, and with more babies comes (you guessed it!) more pregnancy hormones! You’ll need to make sure you keep yourself hydrated, so to give yourself the best chance at a good nights’ sleep, try to drink large amounts of fluids earlier in the day so you can cut back before you head off to bed.

Triplets will show earlier than normal on a home pregnancy test

Home pregnancy test kits work by detecting the levels of HcG hormone in your urine. Testing in the first couple of days of your missed period won’t always show a positive result in single pregnancies, but if there’s more than one baby growing in there, there’s higher levels of hormones happening and you will see results earlier and usually with stronger lines on the pee stick. If you’re getting very distinctive positive readings and its’ early in the cycle, there’s every chance you’ve got more than one passenger on board!

I remember throwing out a dozen perfectly good eggs because they smelt off to me, then cursing the local supermarket when I opened a second carton, to find they also seemed to be bad. Turns out the smell of a raw egg continued to resemble fart for the remainder of my pregnancy.

Many women report being sensitive to smells during pregnancy and it seems that multiple pregnancies can bring this on a little sooner and stronger. Raw meat is a common culprit, so before you throw that pack of chops in the bin, maybe get a second opinion. And you might choose to leave the bbq to your partner and focus on prepping the sides instead for a while!

The hangover without the fun party the night before.

For the luckiest of gals, the feeling of nausea comes with real, actual throwing up. Nausea during pregnancy (especially during the first trimester) is quite common, but when those pregnancy hormones are elevated, it can start to cause a case of the voms earlier than normal and with more, er, gusto? Feeling queasy and exhausted might indicate a viral infection, but if you’re due to bleed and there’s a chance you might be pregnant, it might be worth a trip to the store for a home pregnancy test!

I used to sneer at the stereotypical portrayal of pregnant women as teary, psychopathic bags of hormones. Then I found myself pregnant with triplets. Fortunately, my irrational, unpredictable emotional rollercoaster ride only really ensued for the first few weeks of the pregnancy before leveling off to a degree of over-sensitivity than many women (or perhaps just their husbands) would describe as normal.

The surge of hormones than are racing through your body take a little getting used to and so those first weeks can be tough as you find a way to adjust. If you’re not usually a teary person (such as myself) and suddenly find yourself bursting in to heavy sobbing because it started raining (although you have no plans that require you to go outdoors), it could be a sign that there are some serious pregnancy hormones at play!

How early can you feel movement with triplets?

Believe it or not, there doesn’t seem to be a lot of difference in how early you’ll feel your babies move when compared to a single pregnancy. If you’ve been pregnant before, you’re often able to feel movement earlier than first timers, probably because you’re more tuned in to what you’re actually feeling. Many women report those first movements as flutters and even mistake them for wind. I would describe the first movements I felt as being like a goldfish in my tummy. Some women report feeling their babies move as early as 13 weeks, but more most it’s usually well in to that second trimester.

With triplets and higher order multiples, once you get past the halfway mark, you will be in for a treat as often when one baby becomes active, they tend to wake the others and you will have what feels like an octopus wriggling around in your belly. As your babies grow it can make for quite a show when you can see your belly squirming from the outside!

At the end of the day though, we’re all different. Some women have easier pregnancies than others and the end goal is to have all your babies safe and healthy at the finish line.

Whether you have one, two, three, four or more – you’re so fortunate to have this experience. The bad bits pass, but the best bits do too, so cherish it all. If you are expecting triplets of higher order multiples, check out some advice from women who have been there and done it before.

What are the most common complications during triplet pregnancy?

Can I fit three car seats across? Find out here… 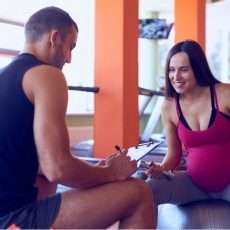 Can you exercise during a triplet pregnancy? This might surprise you.